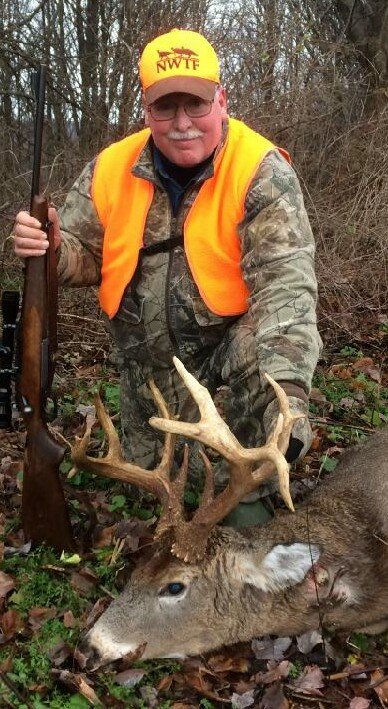 Please share a memory of Richard to include in a keepsake book for family and friends.
View Tribute Book
Richard K. "Rick" Johnson, Jr., 69 of Cassadaga passed away Tuesday, Oct. 18, 2022 at home after a brief, courageous battle with Cancer. Born Oct. 2, 1953 in Dunkirk a son of the late Richard K., Sr. and Joyce Bemus Johnson. He was a 1971 Graduate of Cassadaga Valley Central School. Rick was employed for 32 years as a warehouse supervisor for Quality Markets, Jamestown until its closing. He then was employed as a forklift operator for ten years at Cliffstar, Fredonia until his retirement in 2018. He was a member of Bear Lake Rod and Gun, National Wild Turkey Federation and former member of the Cassadaga Volunteer Fire Department, Dunkirk Conservation Club, Jamestown War Vets and was a former baseball coach for levels of Farm League through Babe Ruth. Rick enjoyed being in the woods, hunting, especially turkey and deer, fishing, mentoring young outdoorsmen, time with family at the Pennsylvania Camp and playing with his dogs. Husband of 48 years to April Courson Johnson, who he married Aug. 24, 1974; father of Kenneth (Jason Perdue) Johnson, Chris (Renee) Johnson all of Cassadaga and the late Shari Johnson Robbins (Nov. 10, 2016); grandfather of, Brenden and MacKenzie Robbins, Chelsea and Colton Johnson and Andrew Perdue; brother of Kathie (Bion) Chaffee. Also survived by aunts, uncles, nephews and cousins. Visitation 4-7 p.m. Sunday in Jordan Funeral Home, Sinclairville where funeral services will be held 11 a.m. Monday. Burial in Cassadaga Cemetery. In lieu of flowers memorials to: Chautauqua Hospice and Palliative Care or Salvation Army Anew Center. Condolences to: jordansinclairville.com
To send flowers to the family or plant a tree in memory of Richard Johnson, please visit Tribute Store
Sunday
23
October

Look inside to read what others have shared
Family and friends are coming together online to create a special keepsake. Every memory left on the online obituary will be automatically included in this book.
View Tribute Book
Share A Memory
Send Flowers
Plant a Tree