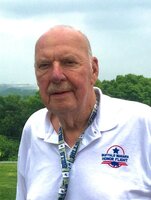 CASSADAGA, NY - Ronald B. Hart of Cassadaga, NY passed away peacefully on Sunday, May 22, 2022 at the age of 90. He was born May 5, 1932 in Buffalo, NY to Edward and Clarice Smith Hart. He grew up in Lily Dale, NY and raised his family there, later moving to Cassadaga, NY. He was the beloved husband of Lois (Yager) Hart for more than 65 years, father to daughters Robin Klepfer (Buffalo, NY), Gayle (Barry) Wilcox (Cassadaga, NY) and Gwen (Ervin) Wilson (Auburndale, FL). Stepfather of Larry (Joyce) Dawley (Bethlehem, PA): six grandchildren Brenton (Syrina) Wilcox, Lori (Bryan) Klepfer Nagaele, Matthew Klepfer, Michael (Melissa) Dawley, Hannah (Christian) Dawley Tatu and Emily Dawley. Eight great-grandchildren and his sister Cassandra (Gerald) Sercu. After graduating from CVCS in 1951 he proudly served in the United States Navy during the Korean War from 1951-1955 until his honorable discharge. After his time in the US Navy, he was employed and retired from Niagara Mohawk after 40 years of service as a Lineman and a Supervisor, during which time he worked at offices in Fredonia and Stow. He was a 30-year member of the Lily Dale Fire Department and retired from the department in 1982. Ron was also a 37-year member of American Legion post 1280 in Cassadaga, NY. Ron was passionate about sports and very athletic throughout his life. He played football, basketball and baseball at CVCS and took up golf after retiring and became an excellent player. He was also an enthusiastic football, basketball and golf fan. He traveled often with his wife and children in the early years and spent most winters on the beaches of Florida during his retirement. Attending the Masters Tournament was a highlight in 2016 and one of his greatest thrills later in life was to become a member of the Honor Flight Program, a non-profit organization created solely to honor America’s veterans. He traveled with other veterans in 2019 to Washington, DC. He is proceeded in death by his parents Edward Hart and Clarice Chalmers, Brother Richard, Son-in law Richard Klepfer, grandson Bearach Wilcox and great granddaughter Angelina Serratore. A truly wonderful life filled with family, friends and memories. A Celebration of Ronald’s life will be scheduled at a later date. Memorial contributions in Ronald’s memory may be made to the Cassadaga Branch Library, Cassadaga, NY or the Bearach Wilcox Scholarship Fund, Chautauqua Region Community Foundation. Arrangements entrusted to Riccardi’s Jordan Funeral Home. Send a condolence by visiting www.jordansinclairville.com