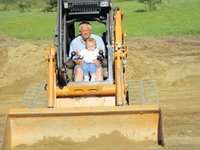 Ronald A. Morse, 65, most recently of Erie, PA, passed away unexpectedly Friday, July 2, 2021, at his sister's home in Arkwright, NY. Born July 22, 1955, in Dunkirk, NY, Ron was the son of the late Marvin and Diane (Hart) Morse. Ron operated heavy equipment from the age of 12 and was so skilled with a bulldozer that the finished site looked raked. He owned and operated Morse Excavating. In addition, he worked several other jobs including oil rigs in North Dakota. He was a loyal, dedicated friend and enjoyed spending time with his friends and family and playing a grandfatherly role whenever the opportunity arose. He was a favorite uncle to his many nieces and nephews, who he taught to drive all types of motorized vehicles at a young age. Father of Stacey (Phil) Schratz and Eric (Amanda); grandfather of three; brother of Jack (Barbara) Morse, Polly (late David) Gambino, Sue (Mike) Lisi, and Don (Donna) Morse. Also survived by nieces, nephews and great-nieces and nephews. Funeral services are private. Arrangements by Riccardi's Jordan Funeral Home, Sinclairville. To leave condolences visit www.jordansinclairville.com